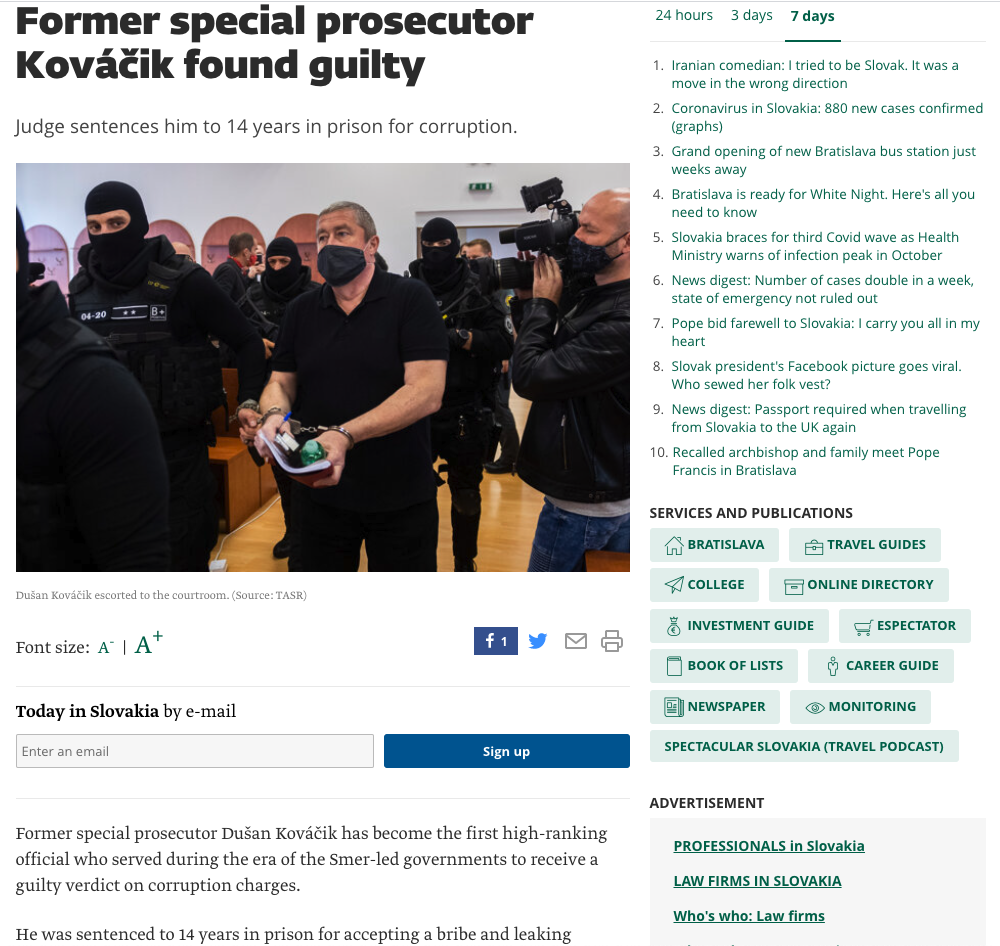 Judge sentences him to 14 years in prison for corruption.

Former special prosecutor Dušan Kováčik has become the first high-ranking official who served during the era of the Smer-led governments to receive a guilty verdict on corruption charges.

He was sentenced to 14 years in prison for accepting a bribe and leaking documents related to ongoing investigations. His property will also be forfeited, the Sme daily reported.

The verdict is a bit stricter than originally proposed by the prosecutor. He wanted Kováčik to unconditionally spend 13 years in prison.

The verdict was delivered by Specialised Criminal Court Judge Pamela Záleská on September 20. According to the verdict, Kováčik not only accepted the bribes, but also cooperated with an organised crime group and exploited his power as a special prosecutor when he leaked information from ongoing investigations.

Kováčik has appealed against the verdict, meaning it is not valid yet. It will be decided by the Supreme Court.

What were the charges about?

Kováčik’s charges are related to the Takáčovci gang, from which he allegedly took a bribe of €50,000. He received the money for helping to release from prison the then head of the group, Ľubomír Kudlička, according to the prosecution.

Makó said he arranged the whole affair. He received €100,000; he gave one half to Kováčik, and the other half was divided between him and former SIS agent František Böhm. The latter was also arrested by the police, but committed suicide.

Both Makó and Böhm (before his death) confessed.

Sme reported that there are several testimonies that can prove Kováčik’s guilt, not only that of Makó, but also the person who ordered the release of Kudlička and the prosecutor in charge of the case and who received Kováčik’s instructions.

The prosecution also mentions cases where Kováčik was leaking confidential information from a file on the Takáčovci group.

Apart from Takáčovci, Kováčik was said to have accepted another bribe of €50,000 from a person close to another organised crime group, Sýkorovci, for hushing up the investigation of a former head of the special police unit.

Kováčik’s trial started in early July. From the very beginning, the former special prosecutor was denying the charges. He turned down a plea bargain that would have secured him a milder sentence.

While several of his former subordinates testified against Kováčik, he was supported by the testimony of ex-general prosecutor Jaromír Čižnár as well as Smer chair Robert Fico, who even came to one proceeding in person. Kováčik was serving mostly during the era of Smer-led governments. Fico and another Smer MP, Ľuboš Blaha, were present during the reading of the verdict.

The last court session before the verdict was delivered, September 17, was marked with the closing speech of supervising prosecutor Michal Šúrek, Kováčik’s lawyers, and Kováčik himself. Kováčik was speaking only at the very beginning of the trial, since he refused to take the witness stand.

During his closing speech, the former special prosecutor was speaking for three hours. He reiterated that he was innocent, and cast doubt on witness Matej Zeman from the Takáčovci gang, one of the three people currently prosecuted by the police inspection service for the alleged manipulation of testimonies.

He also complained on the very quick course of the proceeding that lasted two months, and the media regarded him guilty from the very beginning, Sme reported.